The story begins with Razor Savage, the patriarch and the “greatest guitar ghost fighter” of them all.

The Bayou Savage series will take you on a journey into the netherworld of Razor’s son, Bayou Savage,

Steve Johnson, the scientist and Quirk. the first field agent and Director of the Ghost Defense Institute.

In his younger days, Razor earned the nickname “Rabbit”. He did everything fast. Ran fast, fought fast, and plowed through life with unparalleled intensity. His tenacity was formidable. Nobody ever wanted on the bad side of Razor Savage.

He stood ram-rod straight. A natural smile worked well with his raucous laugh. Razor’s crystal gray eyes could melt a woman’s heart or stare a statue down. The eyes were his personal lie detector and he suffered no fools. He could see smack through bullshit.

He was born on a Friday, the thirteenth day of November, in a year he hardly ever spoke of.  Razor claimed anyone born on Friday the 13th had a choice between super superstitious or not at all. He was born in the middle of seven sisters, with no brothers and no superstitions. The kids came from a long line of musicians and Razor played some kind of music ever since he could remember.

Razor enlisted during the Korean War and wound up in the big bombers as a radar tech.

He was a good father, working hard to raise a family and enjoy the higher elevations of Haywood County. He lived a colorful life filled with a litany of even more colorful stories. Then ghost fighting came along.

The Ghost Defense Institute discovered Razor and his control of the ’53 Fender Esquire in the early seventies. They quickly recruited him. The irony of the talisman’s choice involved Razor’s skepticism for anything remotely connected to the afterlife….especially the ghosts. Life’s cycle was simple for Razor. You’re born, you live and you die. He hoped, like everyone else, for an afterlife…he just needed a bit more information.

Razor thought of ghosts as stray dogs ransacking the garbage. A bullet could cure the dog. Don’t misunderstand, Razor liked dogs well enough. He just believed all animals had a purpose. Chickens should lay eggs, dogs should guard the house, cats should hunt mice, and black snakes were good for eating rats or keeping poisonous snakes away.  If it didn’t lay eggs, hunt or wear a valuable skin, the critter was useless. That was his understanding of ghosts. Ghosts contributed nothing and therefore, had no value. They were an irritant to be dealt with accordingly… like the scavenger dog.

So the story begins……

His crystal blue eyes, set in a laugh-lined face, complemented his trim, six-foot frame.  A compulsive runner’s regimen gave him the sinewy build and stamina required for the years he spent on one stage or another—first as a musician, then as a premier auditor and respected speaker in the field of quality engineering. That discipline came in handy when the Institute recruited him away from a life given to improving the international corporate environment.

……Bayou caught the mirror’s reflection of the eyes that crashed most of his relationships. He still wasn’t remarried. Too many trysts to remember had left him empty and lacking. He tried to blame it on the eyes. The real problem was his obsessive aversion to long-term commitment or the thought of any sort of roots.

Sort of piddlin’ on the guitar, he felt the chemistry between a great instrument and its master. A truly blessed player can comprehend this cherished, magical bond.

The Fifty-Three Fender Esquire looked like a normal guitar, but it wasn’t … not by a long shot. This was the most famous guitar in paranormal history. This was “the ghost killer.”

The Fender came to life in the presence of evil and gave the exceptional and proper owner incredible powers. The talisman sensed evil and possessed a damning life of its own, which surprised the hell out of Razor, then Bayou. You name the evil, and one of the Savages had killed it. Razor recently passed the guitar down to his only son with the expectation that Bayou would continue to thrive within the elite cadre of musical ghostfighters………

He caught the mirror again, surprised by the reflection of the still fairly handsome, balding guy holding his guitar. He didn’t think a man should feel this old in his mid-forties.

As Quirk would say, “It ain’t the years, Buddy, it’s the miles.”

Quirk, the Director of the Institute that orchestrated the psychic wars back in the early twenty-first century, is a burly, barrel chested man.  A thick physique of an aging athlete and a handsome face creased from years of laughter and pain.  Bruised and battered from a variety of car wrecks, football injuries and battles fought, he had the constitution of an ox and piercing hazel eyes.  Quirks dominating presence and military posture had a subtle charisma that could command the attention of an entire room as he entered. Born during the ‘baby-boom’ era and raised the son of a career military officer, Quirk had seen the world.

Leaving home, much to his Mother’s chagrin, at the young age of 18, Quirk was recruited into an elite, top secret and extremely covert cadre of highly trained and specialized operatives during the debacle in Southeast Asia.

Quirk dabbled in the lucrative smuggling trade and his distractions were harmless enough.  A little importing of combustible South American agricultural products wasn’t going to hurt any body. The powers that be, left him pretty much alone.

For a short time, he hired on as a mercenary in South America.  Being signed on as one of the first field agents for the institute, the very long chapter in the life of Jeb Stuart Quirk had begun.

Steve Johnson’s 20-year quest to revive Bayou culminates at midnight on Halloween in 2206. Steve is cool guy with the tenacity and determination of a bull dog. He has an uncanny knack for bringing science and humor together…a rare talent in the world of black and white, where numbers don’t lie. He is blocked by a never ending bureaucracy unfortunately managed by an inept bean counter. Steve’s perseverance brings Bayou back to life…and the doors of hell are opened.

Formidable psychic, traveling, unrestricted, through unconventional dimensions. Leslie was the surprise daughter of scientists who never could comprehend the child’s paranormal abilities, discovered on a grade school field trip to the city museum. Leslie gathers Razor, Bayou, Quirk and Mist during her inter-dimensional travels and opens the portals to bring them into the year 2206. Unaware of Leslie’s part in the unfolding drama, Bayou is skeptically and telepathically summoned to the young woman’s stately home where they form an instant bond and understanding of the dark dimensions.

Bayou’s daughter, smart, funny, sassy, beautiful and fun loving. Once united, Leslie and Mist become like sisters and begin to share power over the Bloodstone Talisman under the command of Leslie for the last centuries. Leslie is obviously grooming Mist to master the art of war using the Bloodstone and the mystical guitars to put the final chapter of the ghost wars to rest. Mist will become the most powerful Savage. 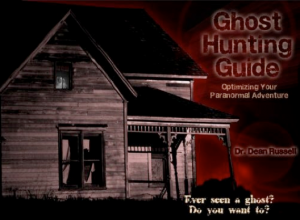 Ever seen a ghost?
Do you want to?

A new practical guide to investigate the paranormal using dynamic project management techniques. 85% of the adventure is front-end loaded before you execute. Plus an in-dept overview of the paranormal world and what you need to know to get started. 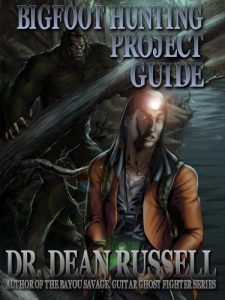